It took me a while to write about my trip to Iceland. It is a pretty hard decision to write the story now, when nobody wants to go there, in December, when it’s bloody freezing (spoiler: Chinese people do that, said a local, because they think a child conceived under the aurora borealis – aka The Northen Lights – is predestined to be a great man. Therefore, winter is the best period for airline companies that sell tickets from China to Iceland. Beat that!). And it is a pretty hard to write now, when looking at the pictures (and there were a lot) I understood that not Oxford dictionary (and no phone memory) would be enough for me to describe the sensations I had down there, in the far faraway land.

The moral of the story is simple: I don’t know if you, who read this story, will find here tips& tricks for the next holiday. Because I don’t think I have more than… take a car and wonder around the deserted roads to the Golden Circle and then to the black beaches, and then to the North…. You do not need to look for the geysers or waterfalls or rocks or beaches that you read in the guide about; any stop will bring a surprise. But for sure I could give you an advice: go there and see for yourself. And tell me how was it when you landed back on (usual) Earth. And that’s because, for me, Iceland was like another planet. And I am not talking just about the landscapes. 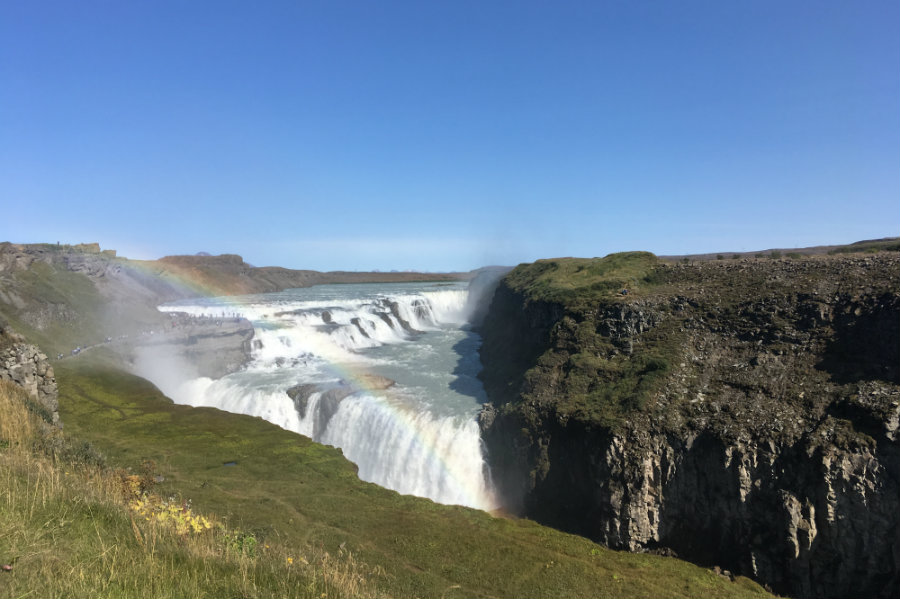 But yes, the nature is unbelievable…

Can you imagine a country living on a boiling, under pressure soil, with fire and ice co-exiting all over the place? Oh, no, I don’t want to talk about in the clichés Game of Thrones kind of story. But again, can you imagine that, on Planet Earth, there are some places where 100 Celsius degrees water comes easily from the springs while the ice glacier is just few hundred meters away? Could you imagine there are some black beaches that make the water look even blacker and the horizon line so weird that looked like you landed on a Sci-fi movie setup (as Vik)? Can you imagine there are so many waterfalls like dozen meters high where the rainbow stays all day long (Skogafoss)? Could somebody say why the entire land is covered with stones covered in grass (“No entry” signs stay everywhere, as well as some electrified fences – not for tourists, but for the wild sheep and horses)? I didn’t even realise there were some kind of creatures on Earth until I saw the puffins – a weird, but cute, at the same time, combination between penguins and parrots. Or that water should be cooled for the pool, as is done in Blue Lagoon or Secret Lagoon (or other dozen pools like them). Or that I could feel so so so lost in the fog, in the middle of the sea, on a boat looking for whales and dolphins…

The architecture beats the movies

I admit, I have imagined a Reykjavik made of small houses, with red or white walls, with cute windows and quiet streets. I found out soon that yes, buildings are not so tall but I couldn’t make the difference between particular houses, institutions or private office buildings – I swear, I didn’t see any sign to differentiate them, no flower, no bike, no curtains, no nothing. Therefore, for days, my favourite game in the city was guessing the destination of (yes) white and red little houses of the capital of Iceland. Odd, isn’t it? Than, there were the churches. I know that the majority of population is Lutheran. But I didn’t see this kind of architecture nowhere before (Hallgrimskirkja). Add to that impression the Utopic Ship sculpture (first, I thought is a whale bone body) and the beautiful none of the kind construction The Harpa (https://en.harpa.is) a concert and conference hall, resembling more with a buildings of tomorrow. The final touch of the town: the graffiti. Well, they were curious, almost surreal- some unidentified creatures, monsters and patterns so different that I know about graffiti.

And the, there were the people, the food, the language…

Yes, I don’t understand a bit of their language. But they do speak English as a Majesty’s officer. I couldn’t understand anything from their food. Of course there were a lot of fish dishes and sea fruits (the best soup I have tasted in a small restaurant called Icelandic Street Food, where the owner told us stories about his grandpa who was a jazz composer…). But they also had whales and puffin dishes (awful!) and after a week I could kill for a fresh fruit. Curious (if not enough by now), a usual lunch at a usual dinner could cost as much as a good lunch in one of the best restaurants in the country (a Michelin-starred one) Matur og Drykkur (Instagram @maturogdrykkur). About the people is said that are one of happiest nations in the world (the cold, the distance form any populated land didn’t bother them, apparently), they saved their own country from the bankruptcy, and that is something to look up to and they have a odd sense of humour (just look at the AD below).

I enjoyed Iceland? You bet. I would return? For sure! And didn’t see yet the North. And next time I will rent a different kind of car 🙂 a better equipped one.

But yes, this is supposed to be a travel story. Therefore, some addresses…