Ceramic shape of Romania: a story about a new RONATIV project

6 exhibition I dream to see… this year, maybe?

I was dreaming of going to Havana long time ago. And I did it. And it was just the way I have imagined: the music, the dance, the colours of the houses, the vintage cars, the little curiosities, the good vibe. (CLICK on the gallery above, for more pictures)

But Havana is tricky sometimes. In my travel to Havana (with a little teaser in Miami), I needed all the patience I could get not to get angry with the taxi driver who showed up after an hour and not be affected of the lack of Internet.

When to go? That’s the fun to go to this destination. It is always warm. “Winter lasts three days”, said to me a nice young local, and he was right: in the last day of my trip was colder (19 Celsius degree), windy and it was raining.

Where to stay? Well, here is a funny thing. You could stay at some good hotels but at some pricey fees if you do not try to book them through an agency. The best in Havana, from my point of view, are the following… 1. Hotel Raquel (it has an amazing architecture and a rooftop to die for it – even some other tourist came to visit the hotel, that made him a touristic spot) – http://www.hotelraquel-cuba.com. 2. Ambos Mundos, the hotel where rumour has it that even Hemingway used to drink his afternoon cocktail on the terrace and a good spot for Internet access – http://www.hotelambosmundos-cuba.com. 3. Saratoga Hotel – a very nice piano bar, a rooftop overlooking the Capitolio and the city centre – http://www.hotelsaratogahabana.com.

The second choice in terms of accommodation could be Casa Particulares (private houses marked with a special sign where somebody could experience the real living in a Cuban house – I saw a lot of them on Aguiar Street and around). Recently, good news appeared for those looking for an alternative to the hotels – the airbnb.com website includes apartments and villas in Havana.

For the sea – a close alternative could be Varadero, with its incredible white sands and blue sea.

Where to drink a good cocktail? Well, Havana Club, Mojito, Cuba Libre and Strawberry Daiquiri – everything is available and pretty good (and strong) everywhere. Cafe Havana (next to Museo del Chocolate) is a good spot, Dos Hermanos (the favorite place for Errol Flynn and Ernst Hemingway – Av. Del Puerto, La Habana, Cuba), the bar on the rooftop of Ambos Mundos and, of course, Bodequita del Medio, linked again to Hemingway adventures, but also to other writers as Pablo Neruda, Gabriel Garcia Marquez (Empedrado, La Habana, Cuba).

What to visit if you want to mark the touristic places? OK, there are some mandatory spots, as Plaza Vieja, Plaza del Cathedral, Basilica San Francisco de Asis, Plaza de Armas (where we could see a lot of beautiful books, vintage watches, antiques and stuff), The Capitol (Paseo de Martí, La Habana, Cuba) and Teatro Nacional (teatronacional.cu). And of course, all the little nice colourful streets from Habana Vieja.

Where to eat in Havana? I wasn’t a fan of Cuban food (maybe because I am vegetarian and, as one of the waiters told me “we are in Cuba, everything has meat”). But Moros y Cristianos (black rice and beans) is awesome. For not-vegetarian people there are pork dishes, a lot of sea food, lobsters, shrimps and different kind of shells. On the other hand, the fruits are very tasty (guava was one of my favourite, as long as green bananas, but I didn’t like at all the big sort of papaya). Try Aguiar street for some Cuban dishes reinterpreted (La Farmacia is a very good, and I will bet on the dessert, guava gem with cheese, as well as Figaro, where I had the best taro bullets – a kind of potatoes). Street food is not alway recommended but churros are delicious, as well as coconut ice cream. Museo del Chocolate is a perfect place to enjoy a hot chocolate and some pralines (Calle Amargura, La Habana, Cuba). And never forget the Tukola – the best cola I’ve ever had lately.

The vintage cars. They are everywhere, in all shapes and colours possible. You can rent one, so you can see the less central area. But in Cuba there is always place for surprises. We book a car in advanced and the driver has never showed up. We tried to find another one, and we have learnt if there are cruise ships around, the prices will double. The average price is around 30-40 euro per hour for a ride in a convertible taxi to local areas of the town, Revolution Square and the Bosque de La Habana (a nice green space), to the Fidel Castro Museum and the Cristo de la Habana overlooking the golf. Try to negotiate the fee with the driver. Or, if you have local friends, you could be lucky to get a vintage taxi for 50 euro per day (not convertible, though). The sensation of seeing Havana from the backside of a cool pink Cadillac is unbelievable. 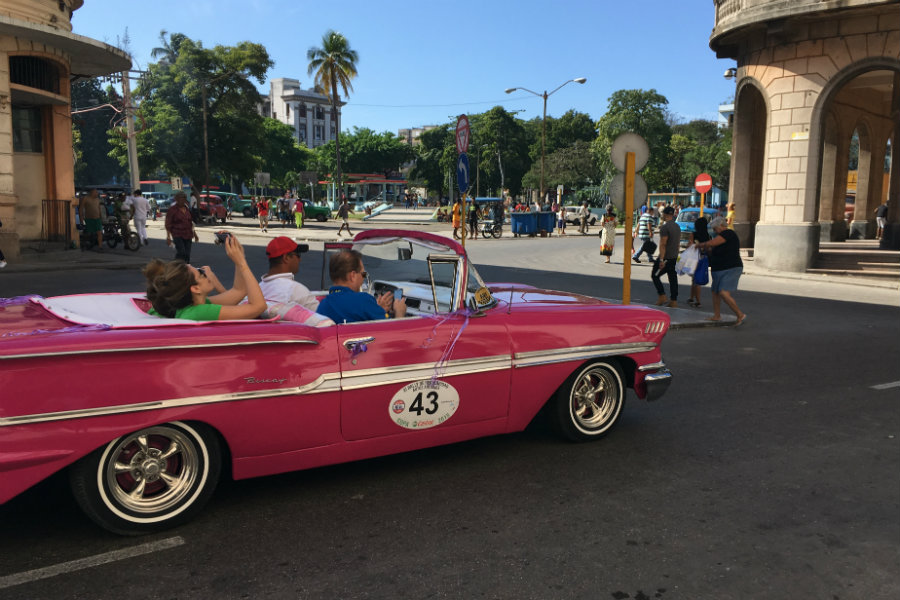 The Internet access. Well, that is a tricky situation. I tried to get them from official points. Oh, no, waste of time: a line of 20 persons could take more than 2 hours. So, I gave up. Then, in front of Ambos Mundos Hotel, I saw dozens of people with their eyes glued to the mobiles and, fiirst, I thought that could be a free Internet point, as you see in Europe. Wrong again. There was an internet spot, but you have to have a tarjeta – a card (sold by some young local entrepreneurs with 3 euros an hour access). So, after I had my tarjeta, I had to find a sport, then to wait for somebody else to leave the network so I could get online. By the seaside, the problem was solved more easily: the internet could be down for days. But, hey, nobody is anxious about it.

To walk, to see, to try. The Cubans do have the reputation of party people. Therefore, I saw old people dancing on the streets, reminding me of Buena Vista Social Club (which is kind of touristic, by the way), locals in the midday in front of half-demolated buildings, dancing, a lot of smiles. Cubans are friendly people, I could say. Obispo, Mercaderes, Amargura – these are streets where you can walk and taste the local life. Plus, do not miss a walk on The Malecón, Havana’s evocative 8 km-long sea drive.

Art in Cuba today. I was amazed by the diversity of art galleries and the beauty of drawings and paintings of young artists. I found a lot of galleries. On Paseo de Marti (from Capitol to the sea) the street is populated with some amazing and very original paintings stands. The second spot not to miss is Wilfredo Lam, the contemporary art museum (be careful, the schedule may not be respected). Then, the O’Reilley street or Empedrado street (gallery Sanlly Viera), but also the super cool yet very curious artist spot / studio of Leo D’lazaro, Ojo de Cyclone’ (Eye of the Hurricane).