His works has something unearthly in them, his nudes are minimalist, as an expression of human spirit, his photographic works are more canvas than images on paper and photographies are more raw material that final products. Yoram Roth loves the light and, in his latest exhibition, he tells us a story merging photography, sculpture, and modern manufacturing technology. And he told me why he chose the Italian Modernists works to start with and why… art is not going ever to be replaced by machine. (Photo up: Yoram Roth, Sheri reclining, 2015, copyright Yoram Roth, courtesy CAMERA WORK)

In Spatial Concepts, Yoram Roth merged photography, sculpture, and modern manufacturing technology. And it took him two years to finally put all together as he wanted to. “This project gave me a whole new level of respect for architects like Zaha Hadid. I could imagine the final piece, but I couldn’t describe it”, the artist said.

These works of yours are called Spacial Concepts because…

Because that’s what Lucio Fontana called most of his work for over twenty years. I don’t usually refer that directly to a single artist, but the title is so good. I am really fascinated by the way the Italian Modernists reduced everything down to the bare minimum, and from that created something entirely new. If you look at his work, but also that of Bonalumi, Scheggi, or Castellani, you see simple canvases. There’s nothing narrative, there’s just a solid colour, but instead there are slashes, bulges, curves and texture. Rather than telling a story on the canvas, they passed through the surface and let light and shadow create a visual interplay. I long ago reduced my photography to a minimum, just the human figure within very simple sets. Nothing else. But I wanted to go through the surface, and I am finding photography limiting. There’s only so much you can do with a print.

How long was the process for Spacial Concepts project – it involves photography, cropping, 3D printing… ? Which one was the most difficult part?

Definitely learning new technology. I took about two years until I figured out how to produce the final work. My team and I always build the sets ourselves, but it was difficult. The goal was to create something that would emerge from the surface in a modern way, so everything had to be designed using parametric software. This project gave me a whole new level of respect for architects like Zaha Hadid. I could imagine the final piece, but I couldn’t describe it. The set designs were sent off to fabrication labs, and then returned to the studio. I had to shoot the images, and then make a two-dimensional version from which to describe the elevations. Once the process was clear – and believe me, there were a lot of detours and dead ends – I was able to move forward.

They’re a reduction, an expression of the human spirit. The naked body itself is unimportant in my work. It’s not there to arouse the viewer. Look, there will always be people that equate nudity with eroticism, or find fault with idealized beauty. I get it. I look at a lot of nude photography and can’t help but roll my eyes.

You used 3D technology in your work. And these machines could replicate anything. How does a modern artist defend himself from being… replaced by machines?

Well the machines are tools, I don’t see them replacing anyone. I also think there’s way too much fear of technology. I’m an optimist, the future I see is more utopian than dystopian. Having said that I think that an art form like photography has become too driven by technical possibilities. I could easily make more than one copy. But why should I? Because I can? That’s not a good reason. I still don’t understand why so many photographers sell their work in multiple versions as editions. Are they worried they’re going to run out of new ideas and need to sell as many of the few they’ve got? If the economic argument is that they need to sell more prints in order to earn enough money then they’re looking at it the wrong way. Photography is cheap because there are too many copies. 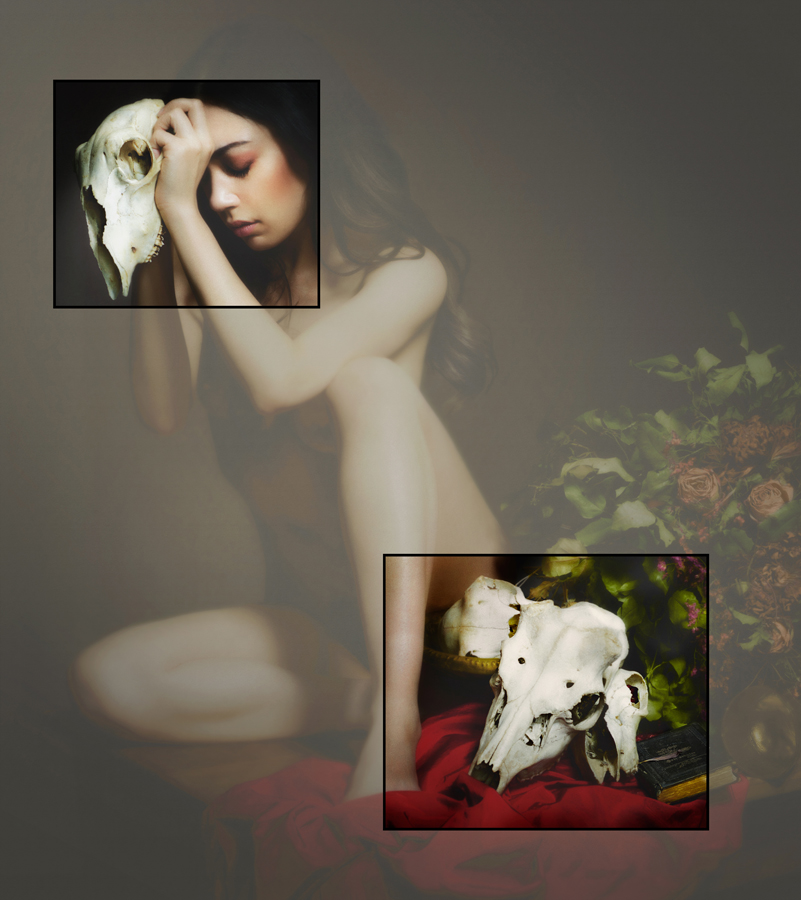 Do you think of continuing this kind of art work, with another artist’s works?

My work is often influenced by other artists. I rarely pay homage to just one. I will often make pieces that reference one or two artists, but various series I’ve made so far tend to draw from a wider range. I’m often inspired by a period or a methodology, and will then inevitably quote artists who worked in that genre.

What is your favourite light in the world?

I like shooting with flash, but there’s something really futuristic about a face that is lit up at night by the glow of a phone screen, or the little diodes from all our electronic devices reminding us they’re there. Sometimes an alarm clock casts very odd shadows at night.

Photographies are keepers of memories, as well as art. What do you think your works will tell about you, after 50 years?

I have no idea. But I want my work to be beautiful, because I believe beauty can withstand the test of time. I have three sons, and I want them to look at the work some day and say “hey, that’s pretty cool.”

What we are going to see in your upcoming book?

Everything, because it’s a compilation of my work over the last eight years. I look forward to seeing it. I only make unique pieces, but I’ve never really seen them together except on my website.

“Magic happens to those who are open to it”: interview with the Colombian artist, Angélica Teuta

6 fashion exhibitions to put in your winter agenda

16 things to do on a Côte d’Azur trip

7 exhibitions to see this fall

An American in France #art #exhibition