A talented illustrator and a cool designer: what combo could be better for a magical collection? I am talking, of course, about the newest and amazing collaboration between the Romanian designer Heliana Adalgiza (www.aitch.ro) and Lebanese designer Sandra Mansour. And about some urban printed jackets and long silk dresses.

“Hei, girl, you’re in Paris! Put on your map Rue Rivoli 224”, it was the message, in one late night at Parisian Fashion Week, from Aitch. And then I knew it: the gifted illustrator I had the chance to take an interview for one of the glossy magazines, had already fulfilled her dream. “I told you that I want to see my drawings on a dress and… here we are. The magic had happened.” 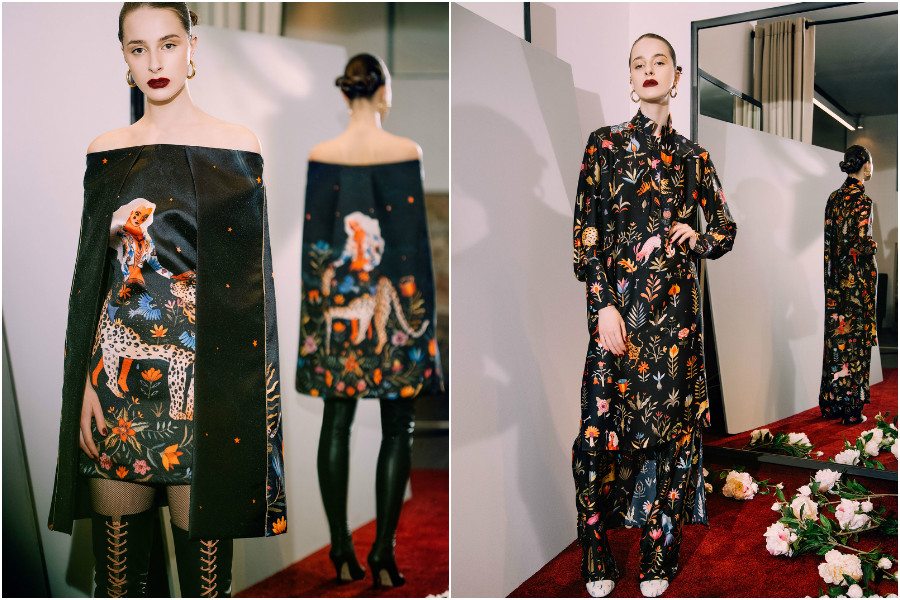 And it is magical that the two girls met. “I was looking for some drawings for this Fall/Winter 2016 collection”, Sandra Mansou told me in that afternoon, while I was following the sign to another designers’ spot on Rue Rivoli. “This way I saw Aitch drawings on Instagram. I knew, in a second, that this is the artist I want to work. We’ve never met. We talked over Internet and I told her how the story is going to be, then she sent me the drawings. It was awesome to work with her”, continued Sandra, while I was looking (and trying) some of the jackets and dresses from the Fall/Winter 2016 collection of the designer from Beirut. “The entire production is there, in Beirut”, said Sandra. “This collection was based on The Magical Warrior. A collection revolved around empowering women with bold pieces, creating a cult of strong & beautiful woman with the bomber jacket culture. We were adamant on the strength of the pieces that we named each piece after an ancient female warrior. This entire collection revolved around creating a sorority between women.”

Therefore, I had to ask Aitch about the collection…

Aitch (photo below) worked for independent publishers and interesting start-ups as well as big companies like Starbucks, Penguin Random House, L’Occitane, Pai Skincare and more. And, to quote Tess Redburn’s (Central Illustration Agency, London) interview for Digital Arts: “Aitch studied at the University of Art and Design in Timisoara where she developed her dreamy, brilliant style – a reaction, she says, to others’ academic approach to human anatomy. Her work is simultaneously wistful and folky (drawing influences from her Romanian heritage), but also really rich and powerful. It’s also been a surprisingly adaptable style.”

How did this collaboration with Sandra Mansour begin?
This project reached me via Central Illustration, the agency that represents me as a professional illustrator. I have no idea how Sandra found out about my work, but i’m really happy that she chose me, because i really think that we’re a match made in heaven.

What’s the story behind the illustrations?
By the time Sandra contacted me, she already had a plan, a vision of how the whole thing should look in the end. And although i was a bit freaked out at first, it all came together beautifully because her concept of powerful, magical warrior women and nature is also a recurring subject of mine.
The first pattern I created was the really complex one with the hunting scene. It started with this old Persian illustration of a hunt that Sandra kept as a reference and wished i would explore on. And so I did, introducing my fierce, red, naked ladies, my specific flora and fauna, and of course, my absolute favourite background – the black background. This is my favourite pattern of the three because it tapped right into my compulsion for detailed illustrated scenes. The second pattern is a mix of my love for porcelain-blue florals and these punk-rock patches, that are either painted or directly sewn onto the fabric. It’s an unexpected cross between the delicate and the grungy and it perfectly fits into Sandra’s warrior-woman narrative. For the third pattern, Sandra found inspiration in one of my older illustrations depicting this lady sitting peacefully among made-up beasts. She wanted her woman in harmony with her pray, and wearing a kick-ass, patched jacket. 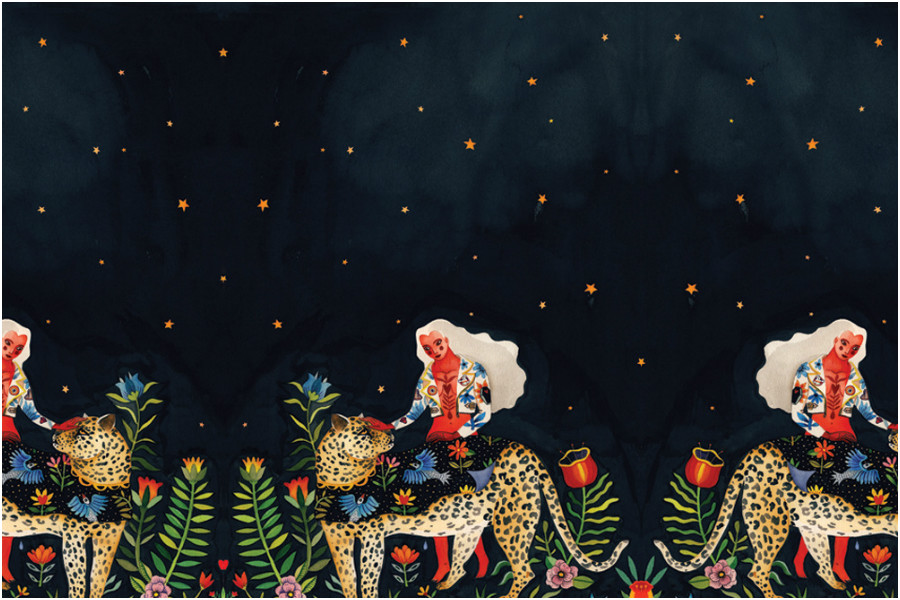 What’s your favourite garment:
I still can not decide but it’s between the distressed jacket and the ladylike dress (photo below)

What’s next?
It is such a pain in the ass to be working on really cool projects but having to keep them secret… All I can say is that there’s another fashion collaboration, a bunch of book covers, some really cool packaging designs and a relocation to Valencia or Barcelona.

The last read book, latest artist discovered, the movie you wish you’d done..
The last book I read was “Pleasures of the Garden”, a literary anthology selected by Christina Hardyment; discovered Leon Bakst, this amazing Russian costume and set designer born in 1866; as for a movie… I kinda like TV-shows better, so i would’ve liked to have been the brains behind the Veep series.