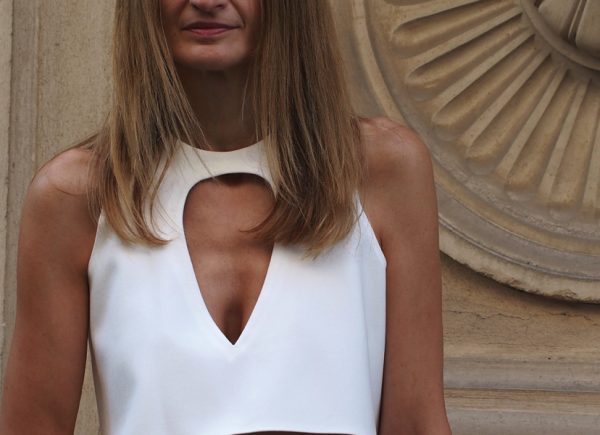 There is nothing more relaxing for me than to wander the contemporary galleries when I am away. I would prefer them whenever instead of classical museums or historical sites. But nothing is better than the moment when the artist is next to you: the feeling of the works and the view is completely changed. That happened to me, when, in Bucharest, at Eastwards Prospectus Gallery, I met Damir Očko, the artist that represented Croatia at Venice Biennale 2015. I was lucky: I saw, in the company of the artist, the “Repeat after me” exhibition and I have learned about the pieces. The collages, the pictures, the scenes from the films, the sculptures like the bell and the stones… “You know, there are studies about the different scales of the stones in the different stages of violence: which one you use to throw in a policeman, which one is use to stone somebody”, said Damir, while I was fascinated by the long table covered with sheets of paper. “These are the scores. Some are for music, some of them are for sounds in general, some are for narrator, some are for actors, for their specific movements, for the accents, for the position and of the mirrors in Third Degree, for example. The scores are very important to my work. And the music, too. I choose the music myself and the instruments on that it should be played”, explained the artist.

4 movies (We saw nothing but the uniform blue of the Sky, The Third Degree, SPRING and TK, collages, sculptures, installations, scores: that is the main core of “Repeat after me” exhibition at Eastwards Prospectus Gallery, open until 23rd December 2016. (eastwardsprospectus.com | damirocko.com)

And, in an obsessive tic-tac sound of one of his installations (presented at Palais de Tokyo and suggesting a false entrance to the exhibition), I talked with Damir Očko about the contemporary art scene, about hidden messages and the next projects.

Why the exhibition is named “Repeat after me”?
It is related to the people I worked in the films. And, as you can see, in the centre of the exhibition there is a set of scores which were made for the narrators in the film. And usually I use that technique when it comes to the poetry that should be heard. It is not a demand, it is an invitation.

How do you choose your “material” you want to work first? There are, in this exhibition, 4 movies, and collages, and some sculptures, all interconnected…
Well, I don’t actually choose them in terms of the first and the last. They all are in the whole mindset, at once. For instance, the scores: they come in various variants: one for narrator, ones for the audience, and these scores open a door for the audience to a better understanding of the artistic act. They have a lot of layers. And the collages, the sculptures, the film, they all come in a definite period of a process. A film is not just a film for me: I work with the people, with music, with poetry, with forms, it is really the ultimate space for me.

You show a lot of human bodies in your work. What is the significance?
For me, the human body is interesting from a political angle. I push the boundaries for the performance because I am interested to show, with the help of the human bodies, in what kind of a society we are living in.

Which one was the most difficult, the most consuming film that you have made?
I think they were all difficult at a point because, when I proceed to make a work, I know I will go to the edge, I will push it to the maximum, therefore every film is an overwhelming experience for me. But perhaps the most difficult, morally speaking, was the film “TK”. That film raised a lot of questions about the violence involved in the film: you have those two men freezing in front of you, and the camera is just watching them. And suddenly you realise that even the camera is participating in this cruel process, because it has no compassion, in a way.

How does a contemporary artist work? On a fixed schedule, on the spot, depending on the inspiration?
It depends. Sometimes I work for months (like I did for the Venice Biennale), but I could have periods of not working. But for sure, as I said, I like to push everything to the edge, I want to be on a definitely new territory, to have periods of nothingness for starting new things. And I don’t believe too much in words as “inspiration”. I would call it more than “a reaction”.

Do the people buy contemporary art? And in which country your works have landed?
Yes, there are lot of collectors for contemporary art. Because the people don’t buy only thing that they can hang or expose in their houses; they buy experiences. And my works are in the collections in France, Italy, Switzerland, Germany (our note – in Fondation Louis Vuitton, Paris, FRAC Le Plateau, Paris, CNAP – Centre national des arts plastiques, Paris, and Mudam, Luxemburg – public collections).

Damir Očko / We saw nothing but the uniform blue of the Sky, 2012 4k transferred to full HD video / 12’/ sound / BW and color Courtesy of the artist and EASTWARDS PROSPECTUS

4 movies (We saw nothing but the uniform blue of the Sky, The Third Degree, SPRING and TK, collages, sculptures, installations, scores: that is the main core of Repeat after me exhibition at Eastwards Prospectus Gallery, open until 23rd December 2016. (eastwardsprospectus.com | damirocko.com)

Fantastic world of Amanda Parer: interview with the artist