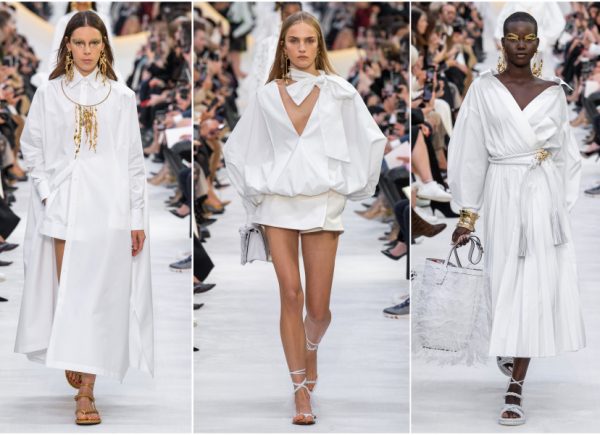 When I first found out about Molecule-F, about eight years ago, I thought there is a chance we could have our net-porter made in Romania. I remember, perfectly, the boxes tied with black ribbons in which the products of the Romanian designers went to the customers. As a journalist who started writing for the economic media, I wondered for a while how many products are sold, if the business is profitable and, like many others, who is behind it (it was Mirela Bucovicean). On the other hand, I also remember the distrustful look with which foreigners or the least initiated people in the world of fashion were looking at me when I said that we have in Romania a platform that promotes Romanian design. Somehow, I understood them at some point. Which Romanian design? There were a few big names in 2010 that made business out of fashion, all sorts of smaller designers, the best and the most innovative of university graduates who were trying to make a brand, who sold their collections from their own workshops or fairs, but which were better known by the fashion industry players and magazine editors. What online platform? I was perfectly aware that even the net-a-porter founder (about whom I remember writing in Elle magazine in 2004) needed years to convince the world that online sales for fashion products are the future in a world that is determined to live on fast- forward.

I met Mirela Bucovicean in person much, much later. It was already 2014, Molecule-F had evolved and attracted more and more Romanian designers, and the world had already used to order online. “What a girl,” I said, looking to the girl with a wide smile on her face, which directed with strength and ambition the Romanian fashion designers at the beginning of the journey. I talked with her a little, at a party, at an event. It seemed to me that she did a bold move in 2016 when Molecule-F returned also… offline, in a physical store. And I was glad that in 2017 I became a contributor to www.molecule-f.com, writing about what I like – stories with and about fashion business made in RO. The next day after the 8 years of Molecule-F anniversary party, with a strong coffee in front of me and the relaxation that only two people who love their jobs as much as they can, I talked with Mirela Bucovicean, the founder of Molecule- F about fashion and fear, about cars and (obviously) about Mikimoto the cat, about phones, social networks, extra-terrestrials and … business with fashionable clothes in a century in which you cannot even know what surprises the next day will reserve to you.

Happy Birthday! Happy birthday, Molecule-F! When will we see each other next time?

At the 9th year anniversary party, of course.

How were the 8 years of Molecule-F? If one word were to define each of them, it would be …

Well, I think the whole industry has changed: we have moved from hobby to business. And when we started Molecule-F, it started out as a play for me, surely, then it was something I was doing to fill my time. Now I would not look at things like this; and I guess the designers think so nowadays. Perhaps a few years ago designers made their collections out of passion because they just liked to do it; now they are thinking about what they are doing as a business, thinking about making money, building a brand. Another good thing is that the status of the designer has evolved from the “Brave Taylor” (or the creative one) to an aspirational and accepted status.

What has changed in worst? I think we are on the dangerous curve in which the status of Roman designer has become so desirable that any aspirant of little fame or some affinity and knowledge in fashion wants to be named designer. The fact that you have graduated a trade school does not make you a designer; a good designer puts a piece of soul in the public space, being seen by anyone, at the mercy of anyone to be judged or appreciated without having the right to replicate, and his product is like a child who has become an adult and has to make it alone in the world. This is the major test and it matters if it passes. In addition, the fact that everyone wants to have this “Roman designer” label, can cause the market to be supersaturated and the label to demonetise.

What are the wild cards, but especially what do the designers fear now in 2018 that stop them from exploiting their potential?

I think you’ve seen some fears because you’ve been constantly talking to them. I realised that there were some fears when I talked to designers at the beginning of the road. We were wondering why they did not show their collection, though they were ready. And I realised from their answers that they were afraid of being judged. And they do not assume that on their way from point A to point B, no one will take them by hand. Even though we can now consider a plus the tremendous opening to the information and the opportunities that young designers have. It’s the fear of being exposed, of being judged. Fear of failure. That was my biggest fear too.

You jumped ahead to a question … 🙂 This was my next question: What is your biggest fear?

Was. Fear of failure. But I treated myself. 🙂 I thought – and that’s what I tell the designers to do – what is the worst and lamest situation I can get. Then I wonder if I can overcome it. If so, then … go for it! I think I have missed some opportunities because I thought that the right time should be right, things should be aligned … I’ve found out that “better” is the enemy of the good. I have learned that there is no perfect time. And you have to listen to your instinct – because you can have all the rational data and there are all good, but you do not have the emotional resources necessary to hit the road, you have not enough force. Then you start the race with the hand brake pulled.

You talk at conferences, with designers, giving them advice. Where did you get the most unexpected advice?

It was a nonesuch, if you want, that I did not expected from a man so competitive as Gabi Stanciu, my lover. He told me that in a competition it does not matter how good you are, but how weak the others are. He changed my paradigm. I’m prefect, I want to do everything right, to have the first place. And this talk has changed my angle of thought. I have learned not to bother so much, not to suffer and accept a failure. After all, I did a lot of things that made me happy and if one or two of those did not get out… that’s it.

Demonstrate that you are not a robot.

We talk now about fast fashion, about “see now, buy now”, about the lack of rules in fashion… So, what are the benchmarks that remain stable?

I think we’re actually turning back to ourselves. Even in fashion. Because so far, we have been reporting us to a trend, to what someone else was wearing; it was as if we were discredited in our own style, in our personality, we always relate to the others. I think we’re going to see the reversal of a consumer-oriented society, I think it’s going to take a while to get back to us.

And if you are an alien that landed on Earth today, how would you know what the landmarks are?

I would look at the quality of the product; I am old fashioned person, I appreciate a thing done with the responsibility, the tradition and the history of a brand. But I think an alien on Earth that would want to be fashionable would have a very hard choice, too many trends and theories. His (hers) conclusion would probably be that people from Earth really like complicated situations.

What would be 10 foreign designers you would have in your portfolio if they were… Romanians?

Haider Ackermann, Dries van Noten, Neil Barett. Then I would take Chanel, Dior with closed eyes. Elie Saab, Attico. I love a lot of Balenciaga, which is quite commercial, but I am a retailer, I have to think about what I would sell. For example, I would not take Margiela; he would not sell here. I bought many things from Numero Otto, who are some cool Italians. And Golden Goose, to wear something sport. See, I’ve added to my portfolio everything – from something… kind of affordable to haute couture.

Even so, does it matter in Romania in order to sell… to have decent prices?

Yes, I believe the Romanian market is tributary to the low prices. There is money on the market, but as things are seen in the industry, I think the trend is a descendent one at the moment when it comes to buying things that are not really necessary.

Who would you sell your business to? Elon Musk, Richard Branson, Bernard Arnault, or Ingvar Kamprad?

To Bernard Arnault. Not just because it’s involved in the fashion industry, but because in times of crisis he knew to keep his business up. I would not sell to the gentleman from IKEA because I’m not convinced he understands the peculiarities of fashion and to Elon Musk I would not sell it because it would be a too small business for him to consider. I think Arnault’s second option would be Richard Branson because he’s creative and has the potential to make this business the best of it. But I’d keep 20% of it. 🙂

You rolled over your car and transmitted it live on Facebook. If you would roll over your business what would you do?

I would try to put it on wheels again. It’s easier than to start it over and I would hate to leave it to wreck. And to not finish the race.

How much would you be able to stay without your phone and social networks?

Although no one believes me, I think it would be a lot. Now I’m addicted because that’s my job. If I were to sell my business I would go and retire. A month, two, three. Hmmm … to be honest and realistic … 🙂 about two weeks.

Never say never but… what do you never wear?

10 years ago, in an interview I said I would not wear a Catwoman suit. Now it would seem okay. And I’d say I would not wear poor quality materials. See, it’s not about style, it’s about quality.

It’s important who knows you. Do not gossip. Always help someone.

The last thing you bought, signed by a Romanian designer, is…

From Murmur, today I paid the order: a bustier and a pair of silk pants.

A question for me?

Why do you do this job?

Because I love it. Because I like to meet people. And I could never do anything else.

When the brand is all about you: the 3 designers we love